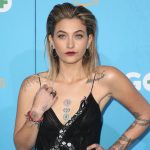 It would do them well to tread very lightly when dealing with the things of God! But then, Wicked Hellywood is not that smart! They are very close to the unpardonable Sin!

From CBN – Movieguide, a non-profit ministry dedicated to restoring Christian values within the entertainment industry, is leading an effort to prevent the release of a film that disgraces Jesus Christ.

Jackson’s portrayal of Christ will be as a lesbian who involves herself in a series of carnal acts with another woman.

According to Eonline.com, the film follows a “party girl with a Jesus fetish who gets mixed up in a violent drug deal and finds a possible way out by masquerading as a nun.”

Release of this film will confuse and mislead the minds of our children and new Christians, Movieguide contends.

The entertainment monitor is urging Christians to sign a petition opposing the film and its blasphemous representation of the Son of God. So far, the ministry has received over 100,000 signatures.

“This movie is an abomination!  It is a test.  God wants to see who will stand for HIM.  I remember when the movie “Last Temptation of Christ” came out.  I had just been filled with the HOLY SPIRIT.   I was so moved, I cried out to GOD and asked HIM what He wanted me to do.  He gave me two scriptures and I printed them on poster board found two fence boards and nailed them together in the form of a cross and attached the posters to it.  I went immediately to where the movie was opening and picketed.  The next day, my mother and I and my two baby boys picketed.  We picketed all through the weekend.  You probably would say, What good did that do?  I would have to admit, it was probably not felt by the people who made the movie, or the actors who starred in it, or the movie theater where it was playing.  It surely did not come to the attention of the White House or Congress, or even our local government.  BUT, it was felt in the realm of the spirit, and it was noticed by the JUDGE of ALL THINGS.  My efforts were added to those other Believers who were praying, and marching and crying out.  Worthy is the LAMB that was SLAIN.  JESUS CHRIST IS SINLESS AND PERFECT and if he were not, there would be no hope for mankind.”  –   Cynthia

Paris is one very disturbed woman. Most of the Demons and Iniquity in her life were passed down from her Father and Mother. Her upbringing left her predisposed to fall.

Proverbs 22:6 “Train up a child in the way he should go: and when he is old, he will not depart from it.”

That scripture works BOTH ways folks! It’s no wonder she chose to become Wiccan when she was very likely indoctrinated into the Illuminati and Occult from birth!  Remember the album “Thriller” her Daddy Michael made? Full of the Occult and Witchcraft!

It is hard to make right choices when you don’t know what is right.  The choices she made once she became of age, only compounded the mess in which she found herself.  She is not capable of recognizing her own errors. 2nd Corinthians 4:3-5

Vigilant Citizen – July 2015 – Paris Jackson, the daughter of pop legend Michael Jackson, appears to be aware of a lot of things but her life took a turn for the worse in the past months. On June 5, the 15 year old entered UCLA Medical Center (the same hospital where her father died) after a suicide attempt as she reportedly “cut her wrists with a kitchen knife and took as many as 20 ibuprofen tablets.” It was then reported that Paris actually “didn’t want to die” as she was simply “looking for attention”. Odd.

On July 13th, Paris was released from the hospital but was transferred to an “undisclosed residential treatment center” – one that was recommended by her doctors. She is therefore still under tight surveillance because, according to People magazine: “The feeling is that Paris is still a danger to herself.” Why is she still a “danger to herself” if she did this for “attention”? Things are unclear. Is there MK programming going on there?

Visit Vigilant Citizen and see the satanic images we assume she drew while in the nut house.

We could not find collaborating evidence for what is portrayed in this video.

She has all kinds of Occult, Illuminati, and Witchcraft Symbols Tattooed on her body.

The Jackson family has a long history of bizarre and abusive relationships.  One can only imagine the world in which Paris and Blanket grew up.  Illuminati families use torture and torment to keep their children in line and obedient.  We are sure that Paris has some real emotional and spiritual issues.  She surely has a handler and the “care” she received at the hospital, followed by her confinement in rehab are not anything that anyone would want to endure.  Yes, certainly, she intended to take her life.  They are not fooling anyone.  She is a danger to herself, but bless her heart she has likely been what we would consider in danger, all of her life.

Anyone  who enters into any form of witchcraft, whether that is Wicca, witchcraft, satanism or magic(k) comes under the control, if not the possession of demonic spirits.  Anyone who is foolish enough to think that they can “control” spirits or that spirits are going to “help” them is the biggest kind of fool.  Sure they will pretend to do things for you, in the beginning, to get you hooked.  But, they know, that once you open the door to their influence, you belong to them.  You opened the door, voluntarily.  YOU CANNOT CLOSE IT AS EASILY.  YOU become captive.  Most often these people do not realize the demon is in control.  They think that they are doing “what they will”…lol… They don’t even realize it is the will of the demon they are acting upon.  Their desires will take them deeper and deeper into the dark side.  It starts out small…but gets much deeper fairly quickly.

Demons are looking for people who will subject their bodies to the desires of the demons.   They hunger, thirst and lust as they did when they were in human form, but cannot act on any of their desires without a body to inhabit.  SO, once you open the door they are waiting desperately to come in.  Once they are in, they can hardly control their lust.  Lust for food, lust for sex, lust for drinking and drugs, lust for blood, and lust for DEATH.   YOU become their VESSEL.