SAMA – Destroyed from the Inside

We are being conditioned and programmed to accept whatever the NEW WORLD ORDER has in store for us. They have been systematically destroying our values, dumbing us down, making us physically weak and emotionally bankrupt. They have been introducing Pagan beliefs and practices through the media, through entertainment, and through the education system. We have been the frog in the pot of water. They have been turning up the heat, little by little. You know what happens to the frog… right?

The following videos and documents were selected to give you an idea of what I am referencing. Many of you will not accept what I am saying because you have been conditioned to believe that these things are all harmless. You may think I am a “Conspiracy Theorist” or an “Alarmist” or a “FEAR MONGER”. I assure you, I am none of those. I am a true follower of the Lord and Savior and his precious Holy Spirit leads me to all truth. I am reaching out to you in love, to spare you from eternal torment. Please take the time to view these things in their entirety. Pray, and ask God to show you the truth. 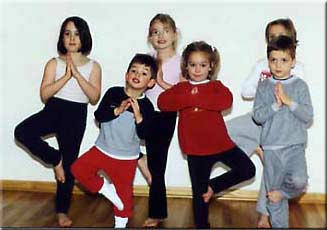 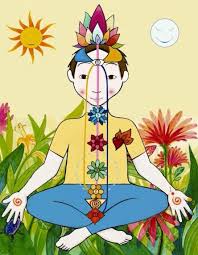 This picture shows the All Seeing Eye of Horus/Shiva in the center of the Child’s forehead; a flower at each level of the Chakra’s of the spine that are awakened and surrendered in yoga; and the flower blossoming out of the head that represents the lotus blossom which supposedly blooms when the Serpent has successfully taken full control of the Child/person and occupies the penial gland in the center of the brain. EVERY SINGLE position, meditation, mantra, exercise, practice; related to YOGA, Meditation and Marshal Arts, is specifically designed to prepare you and move you towards full surrender. To open you up to spiritual forces that are of Pagan Origin/Demonic. THERE IS NO WAY TO SEPERATE ANY PART of those practices from their religious/spiritual/Pagan roots. They cannot be made neutral, nor could they ever be “CHRISTIANIZED”. Just because they label it “Christian Yoga” or “Christian Martial Arts” or “Christian Meditation”; it is a lie! A deception straight out of the pit of HELL!

https://www.psychologytoday.com/blog…and-traditions
An Overview of Meditation: Its Origins and Traditions

http://www.huffingtonpost.com/2013/0…n_3572952.html
Why Companies Are Turning To Meditation And Yoga To Boost The Bottom Line

https://www.cai.org/testimonies/spiritual-deception-yoga
The Spiritual Deception of Yoga
Excellent Testimony of where yoga leads http://www.charismamag.com/life/culture/8471-the-dark-side-of-tatoos
The Dark Side of Tattoos (piercings and self mutilation)

The World offers you all kinds of promises. The devil and his demons will give you riches and power, even what appears to be peace and/or love for a season. But the end thereof is death. The only real power is in the Blood and the Name of Yeshua/Jesus. Demons know it and they tremble.

“My people are destroyed for lack of knowledge” Hosea 4:6. In this day, it is dangerous to act without first researching what you are entering into. The Truth is a treasure that has been hidden. You have to search to find it. Deception is all around us.

Our forefathers fled the old world, which had already become totally demonic and pagan, in search of a place where they would be free to worship the Creator without fear of ridicule, torture and execution. They suffered many hardships and fought hard to build a homeland for us.

You know that the history books have been rewritten and what they teach you in school is propaganda. Rulers and governments have been doing that all throughout the history of the world. They do their best to erase and eradicate anything that would make you wise to their game. The people who lived through the horrors of the past knew this. I really think they tried to leave us clues.

I was recently, suddenly struck with a thought. Nursery rhymes, fairy tales and child games, we all know them well, even to this day. We sang them so repetitiously, as we were growing up. When I learned the truth about nursery rhymes and fairy tales, I was disgusted. I wondered why anyone would teach such morbid stuff to children. Just recently, it hit me. They saw that the truth was been covered up. That history was erasing all signs of the deeply demonic, dark, evil things that had been perpetrated upon the people. The common folk wrote that stuff, in the hope that future generations would wake up to the truth.

2 Corinthians 6:2 “…now is the accepted time; behold, now is the day of salvation”

NOW is the time! Don’t miss it! Today is the day of SALVATION. We are about to enter the darkest times ever known to man. There has never been a darker time and there never will be. We must seek him, while he yet may be found. Because the “night cometh when no man can work” John 9:4. There is coming a day when the door will close. The time of Grace is about to end. Please do not risk everlasting punishment. CHOOSE LIFE!!!

Isaiah 55:6-7 Seek the Lord while he may be found;call on him while he is near.Let the wicked forsake their ways and the unrighteous their thoughts. Let them turn to the Lord,  and he will have mercy on them, and to our God,  for he will freely pardon.
If you go to the store to buy Meat, don't run to the Milk section or the Junk Food aisle looking for it!!