We are on our way to the fictional world of the Borg! 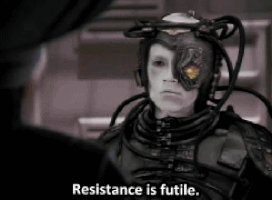 Just after I finished part 3, I was going through some links I needed to post in the News Alert. What is posted below from Now the End Begins and fits right in with where all of this technology is headed. It ain’t good folks and is NOT of God in any way shape or form.

A professing Christian should take heed of what is going on with all the leaps and bounds of this Artificial Intelligence (AI) and NOT get caught up in it.

This soul phone crap and other devices will result in multitudes of millions becoming demon possessed and having their DNA changed resulting in them being UN-Redeemable!

Geoffrey Grider | NTEB – He believes such development will only accelerate during COVID-19. “Instead of just looking through a camera’s lens and having a video conference, you can feel like you’re in the same place with another person,” he says. “This has to become a reality because right now people realize they can’t travel, they can’t spend time with other people in physical places. Even when they do come back, people are gonna have to behave differently. It’s almost like a telepresence for physical people and digital people. We’ve had hundreds of people working on it for years and we still have a ways to go before it just works.”

Think about your smart phones, tablets, pads, laptops…whatever you call it, the whole world is connected on digital devices that run apps for every function imaginable. Ever look up the word ‘devices’ in your King James Bible? It appears 16 times, and every time without fail it is connected to evil, wickedness, with the majority of those 16 references speaking directly about Antichrist in the time of Jacob’s trouble. Coincidence? Perhaps, perhaps not.

2 Corinthians 2:11 “Lest Satan should get an advantage of us: for we are not ignorant of his devices.”

Silicon Valley has been furiously working for years to bring about a trans-humanistic world where the everyday reality you see when you open your eyes in your home will be able to be merged with the digital reality you see when you power up your devices, so that they become one in the same thing. COVID-19 is greatly accelerating this process as the global elites of the New World Order are saying virtual meetings and virtual gatherings are all part of the new normal. In the 26 years since the Internet was opened to the public, our digital world and physical worlds have been on a collision course, and COVID-19 will be used to hammer the remaining few nails into the coffin.

Remember that movie ‘Revelation 2: Apocalypse‘ from back in 1999, and how it showed us the ‘Day Of Wonders’ virtual world where people received the Mark of the Beast? Remember how campy it looked, and we kinda giggled while watching the mediocre acting performances? Take a look at the video below, and think of the world we live in now, and tell me if you still think it’s funny.

A Portal Between Digital and Physical Worlds? It’s Close to Reality

FROM THE HOLLYWOOD REPORTER: Ben Grossmann wants to marry the physical and the digital, exploring what he describes as a mirror world — a “connection between a physical place and a digital copy of that place, so that it becomes accessible to anyone, anywhere.”

The VFX vet is one of three Oscar winners who founded L.A.-based Magnopus, which has been innovating in areas like VR, AR and AI. Combining these opens up the potential to create what he calls a “new kind of movie theater” or other immersive environments: “We’ve been working on creating a digital twin of a very large site that’s a few square kilometers, so that it will exist both in a physical world that people can go to and in a digital copy of that world that people can go to,” he says of the site whose location is still under wraps. “Then we’ve been connecting those two worlds, so people in the physical world can look through a lens and see the digital world around them. People in the digital world will also have portals to see what the physical world looks like.

“It’s almost like a telepresence for physical people and digital people. We’ve had hundreds of people working on it for years and we still have a ways to go before it just works.”

He believes such development will only accelerate during COVID-19. “Instead of just looking through a camera’s lens and having a video conference, you can feel like you’re in the same place with another person,” he says. “This has to become a reality because right now people realize they can’t travel, they can’t spend time with other people in physical places. Even when they do come back, people are gonna have to behave differently.”

He also warns that the current internet infrastructure isn’t robust enough for these types of experiences. “We need 5G, everybody, everywhere, as quick as possible. Hollywood needs 5G to be able to create and display these new kinds of worlds that are much more interactive than traditional video.”

For Grossmann, this state of the world also seems to indicate that Hollywood will increase its use of “virtual production” — processes such as the one that Magnopus helped Jon Favreau develop for the production of The Lion King to simulate a virtual set or location. “Right now we’re working on a movie where it’s a director, it’s a camera person, they’re shooting entire scenes of a film from their homes because they have to work remotely,” he says. “Right now, people go on the internet and they play games with everybody around the world. Well, let’s just do the same concept. Let’s put the movie together and then everybody from their homes can log in and play their part, all in real time, working remotely.”

Grossmann sees progress, but says there’s much more work to be done before these mirror worlds can be fully realized. “One of the biggest blockers that we face for creating a truly comprehensive mirror world is the fact that you can’t have any prerecorded performances, which means that you have to have AI-powered characters. When AI gets sufficiently good enough then we can create characters with it.” READ MORE

The Day Of Wonders And Virtual Reality

What you are watching is a clip from the 1999 movie Revelation 2: Apocalypse. As with most Christian movies from that time period, the acting is so-so, and the production values mediocre. But what will BLOW YOU AWAY is watching how they connect the Mark of the Beast with Virtual Reality, and then reading this story on Facebook buying CTRL-Labs so they can add thought control to their Virtual Reality Oculus.

Take some time and read this article: Will.I.Am Gates Of Hell Remote Views The Windows To Your Soul (And Other Peculiarities Of The Man Named For A Portal)

As more and more transactions become digital in nature and are built around a single global identification standard, supported by Microsoft, the question of who will govern this evolving global community and economy becomes relevant. Especially since nonparticipants in this system would be unable to buy or sell goods or services.

Who will manage? Why the anti-Christ of course!

Part 5 will be added as more info comes to light