When the Globalists, Radical Leftists, Satanists, and that Sort of Ilk has got your back, you know you are on the wrong side!

Proverbs 4:25-27 “Let thine eyes look right on, and let thine eyelids look straight before thee. 26 Ponder the path of thy feet, and let all thy ways be established. 27 Turn not to the right hand nor to the left: remove thy foot from evil.“

If the Enemies of God are for them, you need to be against them!

Famous Globalists & Occultists Come Out in Defense of Ukraine, Turn Internet Toward Putin 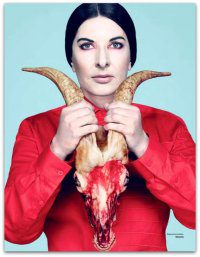 Jamie White | News Wars – Spirit Cooking high priestess Marina Abramovic’s legacy of evil is so strong that she’s pushing people to Russia’s cause, evidenced by the backlash on Twitter.

Well-known globalists and occultists like high priestess Marina Abramovic are endorsing Ukraine in its conflict with Russia, prompting some on social media to consider rooting for Vladimir Putin instead.

Abramovic, a Democrat, known for her occult antics like Spirit Cooking ceremonies, denounced Russian President Vladimir Putin and called for social media to rally to Ukraine’s side of the conflict.

Added note: This Satanic Witch was born in Belgrade, Serbia, then part of Yugoslavia, on November 30, 1946. No wonder this pig is a Democrat as she grew up in a Socialist/Communist environment!

“An attack to Ukraine is to attack all of us,” Abramovic said in a video circulating Twitter. “It’s an attack to humanity and has to be stopped.”

Marina Abramovic calls for a common cause against Russia pic.twitter.com/cYha1qukxt

Abramovic’s dark legacy is so repugnant that many people commented that while they otherwise would not support Russia – framed as the aggressor in this conflict – her endorsement of Ukraine is making them reconsider.

Now that you’re intellectually ahead, stay physically ahead by visiting our store.

But Abramovic isn’t the only one throwing her support behind Ukraine.

Globalist Alexander Soros, son of billionaire George Soros and Deputy Chair of the Open Society Foundation, has also tweeted his support for Ukraine on Thursday.

George Soros himself even tweeted in support of Ukraine on Saturday, saying “We must #StandWithUkraine.”

Ecologist David de Rothschild, the son of banker Evelyn de Rothschild, also signaled his support for Ukraine on his Twitter profile with a Ukrainian flag emoji next to his name and the hashtag #standwithukraine.

When individuals like these give you support, one must wonder exactly what your side stands for.

One user on Twitter pointed to a video by former Rep. Tulsi Gabbard, who warned that anyone calling to defend Ukraine’s “democracy” is lying, because Ukraine is effectively an autocracy that jails opposition media and political opponents of the regime.

Infowars is anti-war and does not support this conflict, and we advise these globalists to keep their endorsements to themselves so as not to galvanize anyone to a particular side.

Fake News Propaganda: Fool Me Once Shame on YOU – Fool Me Twice Shame on ME!