Shane Trejo | Big League Politics – Employees at the Three Square Market in Rivers Falls, WI actually celebrated by wearing “I Got Chipped” t-shirts after they were implanted with microchips by their bosses.

Galatians 6:7 “Be not deceived; God is not mocked: for whatsoever a man soweth, that shall he also reap.”

The microchips are the size of a grain of rice, and they were embedded into the hands of employees for Three Square Market, a vending company that makes kiosks to dispense food and beverages. It was done supposedly for the purposes of convenience, and employees’ hands can now be read to verify their identity. 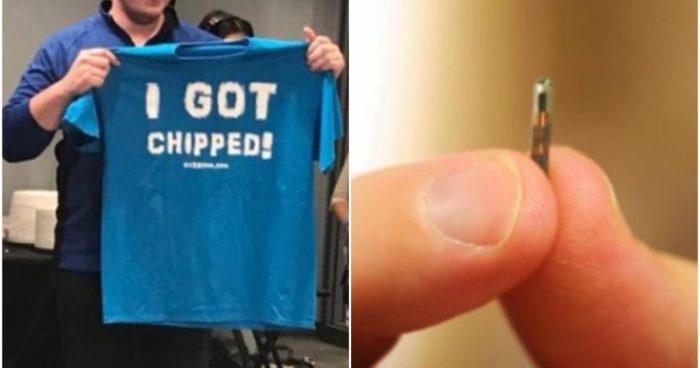 Three Square Market Chief Operating Officer Patrick McMullan dismisses any concerns that microchipping his employees is akin to Big Brother. He told detractors to “take your cell phone and throw it away” to defend his invasive practice.

Biohax Sweden produced the microchips, and they have thousands of people implanted with their technology throughout the Europe. They hope to expand their business across the pond, and Three Square Market is happy to help them do so, as a modern dystopia continues to take shape.

The microchips were implanted by a local tattoo artist who pinched the individual’s skin after swabbing the area, and then made a small incision with a syringe before installing the chip.

“The pinch hurt more than the injection,” said McMullan. “It stung for about an hour and half afterwards, but now it’s getting back to normal.”

Since debuting the microchips in 2017, Three Square Market has vastly expanded their plans with the technology, hoping to convince larger firms to adopt microchips.

“We’ve been in touch with NASCAR, with baseball stadiums,” Three Square Market President Todd Westby told KSTP. “We’ve gotten in doors that we would have never gotten in before.”

They are looking into drastically expanding the technology and making it standardized, showing how it can already be used to open doors, buy food items, and turn on computer portals. Westby demonstrated how the microchips can effectively store biometric information as well.

“I scanned my hand and here’s my driver’s license information,” Westby said, holding up his phone to astonished reporters.

They hope to introduce the idea to the masses in the form of bracelets containing microchips, in order to get the masses used to having microchips implanted in their skin down the line.

“The microchip is a big talking point, but it’s not practical right now,” Westby said. “What is practical is RFID bracelets.”

While entrepreneurs, fake news readers, and government bureaucrats may love the idea of microchips, privacy rights advocates and devout Christians may disagree. Not only does the project facilitate ubiquitous spying, but it also may fulfill Biblical prophecy written in the book of revelation.  Revelation 13:16-17

The horrifying vision of the future described by George Orwell in “1984” could be made a permanent phenomenon if microchipping becomes mandatory. Source: Big League Politics