Why they were protesting the President and Vice President for being Fascists, when they are not Fascists! BTW, according to reports, it was a big flop all across the country!

Philippians 3:17-19 “Brethren, be followers together of me, and mark them which walk so as ye have us for an ensample. 18 For many walk, of whom I have told you often, and now tell you even weeping, that they are the enemies of the cross of Christ: 19 Whose end is destruction, whose God is their belly, and whose glory is in their shame, who mind earthly things.”

WHO fits the description of a Fascist?

1. Fascism is a form of government which is a type of one-party dictatorship.

Hillary TOOK OVER the DNC according to Dirty Donna Brazile!

Let me see. Just who was it that said something about a dictatorship? Was that Mike Pence? NO.  Was it Steve Bannon? NO. Was it any other person close to Trump? NO.

Why it was none other than Good ole RINO George W. Bush. Friend and pal of the Clinton’s who said it!  “If this were a dictatorship it would be a heck of a lot easier… just so long as long as I’m the dictator”

2. Fascists are against democracy.

There was no “Democracy” rigging the primary and screwing Bernie Sanders was there?

3. They work for a totalitarian one-party state.

Yea that’s the Democrats and ESTABLISHMENT RINO’s for sure. They believe no one else is right and they are entitled to rule and reign. Antifa was founded by these Communists and they take out ads stating they want to overthrow the government!

4. Such a state is led by a strong leader—such as a dictator and a martial government.

Dirty Donna does not want to be Arkancided! Donna Brazile Says She “Feared For Her Life” After Seth Rich Was Killed

Yes, Trump IS a strong leader. You have to be or you are a limp wristed puppet which we have had for the last few decades! It is the AGENDA of that leader and the DEMONIC mindset, the DELUSIONS of GRANDEUR that leads to a HITLER or an OBAMA or a CLINTON!

Oh and Dirty Donna also says: Clinton Campaign Officials Made Her Feel Like “Patsey The Slave”

I don’t see the Trump administration declaring martial law or taking over all public utilities, or bringing back slavery like the former Muslim attempted to do by signing executive orders!

No. In fact, Trump has rescinded many of those FASCIST orders Barry Soetoro, AKA the Muslim Barack Hussein Obama signed into law! The Muslim did it setting the stage thinking Crooked Hillary would be the next president so she could take over America!  That is what Hitler did! That is Fascism!

What I do see is a band of Communists on BOTH sides, and other world leaders that have called for a New World Order! This is the Fascism that President Trump battling! Seems to me all of the above is the platform of Fascist Trash that are the Democrats, Progressives, Socialists and Communist Parties! I don’t see any groups on the right out killing cops, rioting and looting. I do see Antifa and Black Lives Matter doing it. How come Antifa and BLM are not out saving women and children from sex traffickers? Why is BLM not out busting out the windows of Planned Parenthood Abortion Mills? After all, Planned Parenthood was set up as a way to exterminate the black race! It is also run by a White Privileged – White Woman!

So if all of the parties listed above are for human rights, especially the rights of poor, trodden down, helpless women? Why are they not out busting down doors rescuing the children, teens, and young women who are being held as Sex Slaves? Why are they not out in droves protesting Hellywood and the white male rapists??????

Who else is asking questions?

And yet nothing is being done to protest on behalf of women, and even children, victimized by Hollywood superstars.

The leftists marching in Los Angeles have not marched against Hollywood studio heads, “A-list” stars, and media companies who are among 63 accused of misconduct thus far. 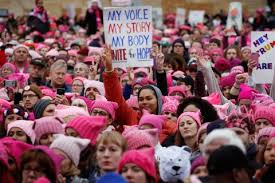 No — they are marching against one man who was caught on tape joking about sexual assault, and who happens to be a Republican.

Hollywood stars are often in the front rank of protesters against Trump. Many denounced his comments about women on the infamous Access Hollywood tape. Earlier this year, they donned their “pussyhats” to protest his inauguration.

And yet there have been no women’s marches in Hollywood, no vigils for the victims of decades of abuse. Source: Breitbart News

Here is a clip from a really bad movie Robot Holocaust.  It has a scene that depicts the Feminist Movement pretty well! See the article Medusa Cult and Feminism

All they can do is rail against men and manifest demons as we see in these 2 short Videos!

In the first one, this WHORE says she is sick of being a baby factory. Well, skank, you have to have a man to get pregnant so there is a cure. Stop spreading your legs if you don’t want kids! But then I am sure she rushes right to the nearest Abortion Mill to remedy that!

This one speaks for itself!