Oh you don’t think there is such a thing as a Catholic Witch ? Best think again!

She is just like her cohort Crooked Hillary Clinton , she is a Necromancer and practices Witchcraft! She is also in an exclusive club of the Wicked Witches of the West, that includes Mad Maxine Waters, Dirty Dianne Feinstein, Kooky Kommunist Kamala Harris, and many more Feminist Silly Women! 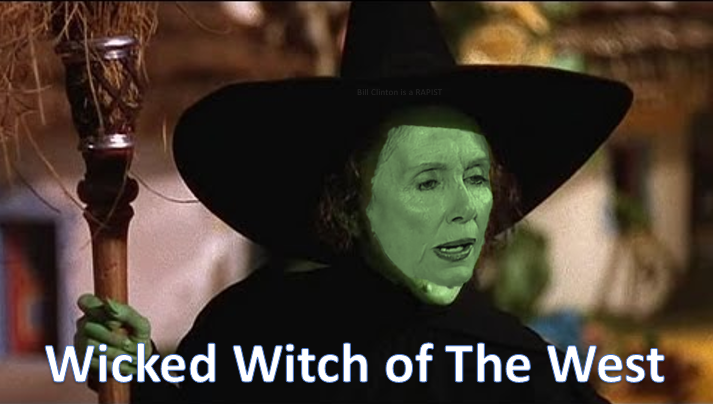 Her constant “brain freezes”, stammering and stuttering, glassy looking wide eyes, wrong pronunciation of simple words,  are a result of all the demons she is hosting. They are trying to manifest all at once and she is being overloaded just like a computer that has to many tasks going on, and it freezes up!!!!

CNSNews.com – At an appearance in San Francisco last week, House Minority Leader Nancy Pelosi (D.-Calif.) repeated her story that the spirits of women’s rights activists Susan B. Anthony, Elizabeth Cady Stanton, Lucretia Mott, Alice Paul and Sojourner Truth squeezed into her chair—and then spoke to her–the first time she went to a meeting at the White House after being elected House Minority Leader.

When she was elected to that post on Nov. 14, 2002, Pelosi became the first woman in U.S. history to become the leader of either party in the House or Senate.

“I sit down and as he [President George W. Bush] is being so gracious and welcoming, I feel really squeezed in in my chair,” Pelosi told the audience at an August 22 event sponsored by the Public Policy Institute of California.

“I mean I’m, like I’m squeezed in in my chair,” she said. “And I am thinking: What is this? And I realized Susan B. Anthony, Elizabeth Cady Stanton, Lucretia Mott, Alice Paul, Sojourner Truth. All of them. They were all in the chair, right there, with me. They were right there. I’ve never had that experience before or since. They were right there on the chair. And I could hear them say: At last we have a seat at the table.

“And then they were gone,” said Pelosi.

Pelosi’s 2005 commencement address at Goucher is available on CSPAN. Here is a tape of Pelosi telling the story to the Women’s Political Committee in 2012:

So, we can deduce from the words out of her own mouth, there are at LEAST FIVE demons that have Possessed, and are currently STILL in her directing her thoughts and ignorant ramblings!

“They were all in the chair” and her feeling “squeezed” was all of those demons manifesting at once.

For those of you who believe there are such things as Ghosts, well you are Spiritually Ignorant and need to Find out what they Really are!

She says they are gone, but I submit to you that they are STILL there, STILL speaking to and through her. A tell-tale sign of possession is the wide eyes, face spasms, confusion, stammering and stuttering constantly!

Evidence is as follows:

There are many many more instances of her demons manifesting if you care to look. That is if Nasty Nancy’s Communist cohorts at YouTube does not Purge them!

Let’s focus on Necromancy and as you saw in the MCR videos, the words came right out of the “Horses Mouth” Nasty Nancy Herself! )

Nasty Nancy Pelosi, by her own admission and confirmed by video, communes with the dead specifically Susan B. Anthony, Elizabeth Cady Stanton, Lucretia Mott, Alice Paul and Sojourner Truth! This is Necromancy. This IS Witchcraft! Oh but wait, She is a practicing Catholic!

Catholicism is steeped in Witchcraft as both have Pagan practices and rituals!

Oh and if you are a Catholic and say you don’t agree with Nasty Nancy Pelosi, or Barack the Muslim Obama, or Crooked Hillary Clinton on the issue of abortion, and STILL VOTE Democrat, then you are just a GUILTY as if you ripped the baby from the womb yourself!

You are NOT a Christian and you DO NOT abide in the Doctrine of Christ!

2nd Corinthians 6:14 “Be ye not unequally yoked together with unbelievers: for what fellowship hath righteousness with unrighteousness? and what communion hath light with darkness?”

Companion Video to this article