“I’m inviting the American people to get deep with me,” she said. “It’s time for that in order to address these times and to transform them.” 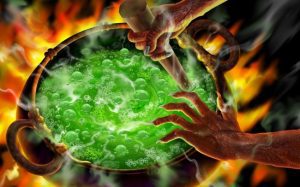 The Witches Cauldron of Globalism, Communism, Socialism and Infanticide in the Party of Death and Destruction is filling up fast. You need to turn up the heat to maximum and boil the literal Hell out of these devils. They need to be Rendered down and exposed for who are what they are… Luciferian’s!!!

Spread the word about this Wretched Witch folks!

Oprah’s Spiritual Guru Running for President: ‘Inviting the American People to Get Deep with Me’

PJ Media – Oprah’s spiritual adviser (and Crooked Hillary’s too) launched her campaign for the Democratic presidential nomination in Iowa this evening, saying this morning that her aim is to fix the “amoral economic system” and prompt “a moral and spiritual awakening in the country.”

Marianne Williamson, an activist and best-selling nonfiction writer, unsuccessfully ran for Congress in California in 2014; her campaign theme song was penned by Alanis Morissette.

Oh, there you go.  Play the race card, stir it up.  That is a very vague statement, “racism left over from slavery”?  I would like to hear her expound on exactly what she is referencing.  Because I live in America and I don’t see that.  There have not been slaves in AMERICA since 1862.  There was never slavery in a huge section of America.  I can tell you from experience in business that Blacks have been given preferential treatment in funding, schooling, jobs, and housing since the 70’s.  And women and minorities have been receiving the same since the 80’s. How long are they going to milk the slavery thing?  This is a tactic used by the Elites to bring chaos and unrest.

And we do not need a “Activist” as a President! We need a God Fearing Man or Woman, (preferably a Man as that is God’s way) who will lead by Righteousness!

She added that being “someone to articulate what’s really happening, the deeper levels of our moral dysfunction” is her “qualification for the presidency at this time.”

She states “being someone to articulate what’s really happening, the deeper levels of our moral dysfunction” is her qualification for the presidency at this time.”  Is that so?  And just what qualifies her to make the determination on what is “really happening”?  She repeatedly says she is going to articulate these deeper truths, but, has she laid them out for you to judge?  She is a “self-appointed” guru and as far as I can see, she has very little depth.

With a platform of costly proposals such as universal healthcare, Williamson argued that “our current economic system does not lead to a vibrant economy.” Read more at PJ Media

So, she is an economist?  Can we see her credentials?   Apparently, in this upside-down world, anybody who can chum up to some major support can run for President.  No matter how looney they might be.

Ok, wait!  So she is a cabaret singer turned New Age Witch, who had two years studying theater and philosophy at Pomona College until she dropped out?  Oh, well, surely that must qualify her to lead the most important nation in the world in it’s biggest time of crisis.  Of course!  NOT!

The Hill – Author and activist Marianne Williamson has announced a bid for the 2020 Democratic presidential nomination, joining a crowded field of candidates.

Williamson, who launched her campaign at an event in Los Angeles late Monday, called on voters to have a “meaningful conversation” about potential political solutions and described the current national discourse as “shallow.”

“I want to engage voters in a more meaningful conversation about America,” she said in a statement.

“About our history, about how each of us fit into it, and how to create a sustainable future,” she continued. “Our national challenges are deep, but our political conversation is shallow. My campaign is for people who want to dig deeper into the questions we face as a nation, and deeper into finding the answers.” Read more at the Hill

I have already posted an article about this Jezebel here – New Age Witch Marianne Williamson looking into 2020 Presidential Run. It establishes her connection to two of her fellow practicing Witches, Hillary Clinton, and Oprah Winfrey. Do not be deceived by this hound from Hell folks. She is into very deep black magic.

I have included a few paragraphs from a couple of my articles below:

Marianne Deborah Williamson met Hillary in 1994 and was invited to the White House when Hillary was First Lady. “You were wonderful to me back in l994 when you invited me to the White House.” Source. This woman is deep into metaphysics which is ritual Magick. Perhaps she is on the same road that occultist Jack Parsons, Scientology founder L. Ron Hubbard and the Infamous Aleister Crowley were on in their quest for the Babylon Working. Some speculate that Hillary is the result of that ritual. It would explain why she can get away with so much evil. Whatever the goal of these Witches, you can bet they aim to destroy Christianity and usher in a New Age Utopia.

From Oprah Winfrey Part 2: What god does she Worship?

Oprah & Friends channel on XM Satellite Radio, which is offering Marianne Williamson’s presentation of A Course in Miracles (ACIM). The course was authored by research psychologist Helen Schucman (1909-1981). Dr. Schucman maintained that between 1965 and 1972, an “inner voice” (which she identified as Jesus) dictated the material to her, which she took down in shorthand and transcribed into what was eventually published as A Course in Miracles.

It is often described as “New Age Christianity,” a version which posits a Jesus who offers more love and forgiveness while wanting “less suffering, sacrifice, separation, and sacrament.” (Some have noted that the concepts contained in ACIM are primarily a hodgepodge of teachings from various world religions.) ACIM (and other similar courses) are available in the form of books, audio/videotapes, seminars, and workshops through the Foundation for Inner Peace (FIP) and through its related organization, the Foundation for A Course in Miracles (FACIM), which operates an academy and retreat center known as the Institute for Teaching and Inner Peace (ITIP).

She is a witch, and witchcraft is all about manipulating the world around you to suit your desires.  Witches are therefore primarily self-centered.  Magick is manipulation and deception.  Their motto is “Do as thou wilt”.   I think we have enough self-centeredness in Washington already.

What we need in Washington is people of fine, upstanding moral character based on the Word of God. When we had that… we had the best nation on Earth, bar none.  That is why everyone wanted to emulate us or come and join us.

I don’t know about you, but I just don’t see how inviting demonic spirits can have any positive effect on our nation.  And these folks are into Spiritism big time.

Why is a Jewish Woman writing New Age books, and not about Judaism?

BTW, when I researched and wrote Hillary’s Witchcraft, this woman figured prominently as one of Hillary’s “Spiritual Advisors”!

Marianne Williamson was born to a Jewish family in Houston, Texas, in 1952. She is the youngest of three children of Samuel “Sam” Williamson, an immigration lawyer, and his homemaker wife, Sophie Ann (Kaplan). After graduating from Houston’s Bellaire High School, Williamson put in two years studying theater and philosophy at Pomona College in Claremont, California before dropping out in her Junior year and moving to New York City to pursue a career as a cabaret singer.

In 1979 Williamson returned to Houston, where she ran a metaphysical bookstore. In 1987 she helped found the Los Angeles Center for Living, a support facility for those with life-threatening illnesses. Two years later she began Project Angel Food, to deliver meals to AIDS patients. In 1990 Williamson had her only child, India Emmaline. She refuses to identify or discuss the father of her daughter, and instead chose to raise India alone as an “unwed Jewish mother.” Source: Wikipedia

She quotes Occultist Alice Bailey in one of her books. Quotes from The Emergence of the “Mystical Church”  LetusReason.org

Theosophist Alice Bailey was a mystic and occult prophet she is considered the mother of the modern New Age Movement. Alice Bailey was the chief channeler for Djwhal Khul, the Tibetan Master, who dictated through her nearly 20 books. Alice Bailey rejected the Christ of Scripture to embrace a different Christ because of her acceptance of an occult belief system. Most people do not realize how significant she was in shaping the new world religion that we see surfacing today. See Alice Bailey’s 10-point Plan at Battle Cry for Christ

We do not need a President who is akin to Biblical Jezebel in charge. The whole of Washington DC is a cesspool of corruption and Satanism. It would behoove you to go watch Belly of the Beast to see exactly why Washington DC was set up the way it is and how the demonic forces are controlling it.

A President who will summon demons and “usher in a mystical age” will only ensure the complete and total downfall of America!!! That has been the plan of the ruling class all along.

You also need to know what all of this Mystical New Age crap is all about.

Is the Age of Aquarius in Full Swing? Part 1

The Age of Aquarius Part 2: Tapping into the 4th, and 5th Dimensions via Mind-Altering Drugs

And speaking of Mind-Altering Drugs, LSD and the new DMT, listen to this interview with a former guru!

Weaponized LSD and DMT have been used by the CIA to manipulate and control people who want to “expand their minds,” but after taking the drug they actually experience the evil of the “left-hand path.” There is a reason why it is known as “the Spirit Molecule”.

Jan Irvin joins Alex to discuss his experience taking DMT with Joe Rogan and Eddie Bravo and solutions to this drug deception.

This interview exposes the truth behind the American drug culture.