Or will it be another one they have Weaponized at the ready?

Back in 1999 they dug up Bodies in Alaska to get the Spanish Flu. Has it been Weaponized?  Six unearthed bodies yield clues to 1918 Spanish influenza outbreak; Frozen corpses found in Norwegian Arctic help scientists study virus

The China Virus, Covid19, was a trial run…, a dress rehearsal for the mass murderers! It did not kill and maim as many as they had hoped for. 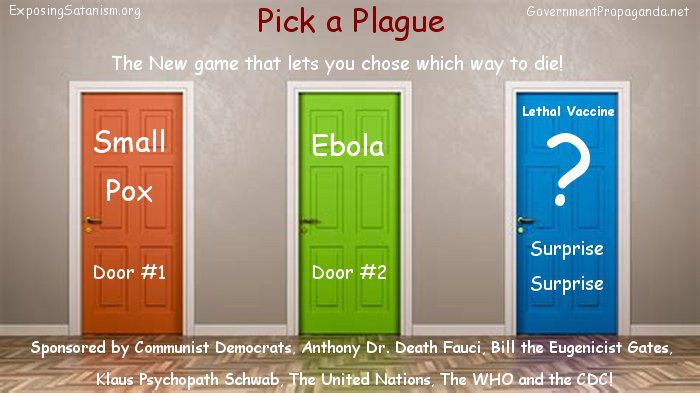 So now they are signaling what they are going to do next!

The elite’s do tell us through their books and publications, movies and news releases what they are doing – this is called Revelation of the Method. If you are too stupid to recognize it for what it is that is your problem from their point of view. It is a form of ritual mocking of the victim.

We’re On The Fast Track To Genocide

Stefan Stanford | All News Pipeline – An interesting story over at Yahoo News on Tuesday that many people might just casually glance over before moving on to other stories caught my eye simply because of another story I had read days before the Yahoo story, as well as another story I remember reading several months before both of those.

With the Yahoo story reporting the FBI is now investigating vials labeled ‘smallpox’ that were recently found in a freezer at a Merck facility outside of Philadelphia, Pennsylvania, just back on November 4th, vials that weren’t supposed to be there, the Daily Mail reported none other than Bill Gates recently warned ‘terrorists’ will try and use smallpox as a biological weapon as he was putting in a plea for billions in dollars of more funding to ‘prevent future pandemics’.

And just as Bill Gates and the Bill and Melinda Gates Foundation actually hosted ‘Event 201′, a pandemic preparedness ‘exercise’ back in October of 2019, right before COVID ‘went viral’, Gates now warning of ‘terrorists‘ using smallpox to terrorize us gives us a hint of something diabolical ahead considering the other stories that were recently published.

Because while smallpox was supposedly eradicated back in 1980, another story from Yahoo from back in September of 2021 reported the Assistant Secretary for Preparedness and Response at the U.S. Department of Health and Human Services had just arranged for the delivery of $112.5 million worth of a drug called TPOXX, a medication used to do what? Well, treat smallpox of course.

So while there is a chance that these three stories that might seem unrelated actually are ‘unrelated’ to each other after-all, there’s also the chance that the three stories are sewn together like a perfectly stitched ‘conspiracy’, one used to further crack down upon the free people of the planet. So we should definitely watch out for more smallpox stories in the days ahead.

We’ll be taking a more detailed look at each of those three stories in the next 2 sections of this story below before looking ahead at what we still believe is the ‘big picture‘ that the globalists don’t want us to see, the complete depopulation of the planet Earth being forced upon us with the globalists using one bioweapon after another upon ‘the masses‘, putting us on a fast-track crash course towards depopulation as forecast by the Deagel Report and actually called for on the Georgia Guide Stones.  Read the rest here

A new Ebola vaccine that was developed by the Oxford University team that made the AstraZeneca Covid jab is being trialled in humans for the first time today.

The jab – currently known as ChAdOx1 biEBOV – uses the same technology as the breakthrough coronavirus shot.

It has been designed to tackle the Zaire and Sudan strains of Ebola, the two most common and deadly types.

The trial will see 26 people between the ages of 18 and 55 given the jab and monitored over a six-month period in Oxford. Another trial is due to start in Tanzania by the end of the year.

Patients will begin to be vaccinated from this morning and results are expected in the second half of 2022.  The phase one study will test the safety, side effects, best dose, and timing of the new jab.

Later trials will see how it performs against Ebola in the real world. Other Ebola vaccines do exist based on the Zaire species, but Oxford researchers hope the new jab will have a wider reach. Read the rest here

The Elites Belief System and Values

The elite believe they are a more advanced form of human. In order to justify their belief they grafted Darwin’s theories of biological evolution onto social organization to create Social Darwinism. Over the centuries they have referred to the public variously as cattle, sheep and “its” (as Plato did in The Republic) and Social Darwinism is merely the modern expression of this attitude and their elitist belief system. Under this belief system only those that have proven their worth over many generations of dominance and control are worthy of entrance into high elite circles.

The elite throughout history in support of belief in their own superiority over the common person have practiced interbreeding among themselves. They do this to preserve intelligence, love of power and above all the ruthlessness and willingness to kill as required. They still practice this today. Also, along similar lines they believe in and practice of eugenics on the public to control the population and to make them more docile, controlled, stupid and compliant. Having been exposed by Hitler’s atrocities the elite went underground – for example by renaming Eugenics Quarterly to Social Biology in 1969.

This is not a belief but more of an sobering fact that must be considered when evaluating the values and actions of the elite. It has been well established, as shown by Andrew Lobaczewski in his book “Political Ponerology” & cell phone spy, that the elite and those that are most capable of rising to the top of a system based on money are psychopathic. This includes leaders in all centers of power including business and politics. As psychopaths they have no conscience, lust for power and control and are literally capable of anything.

The Ends Justify the Means

Because the elite truly believe that the ends justifies the means and the fact that they are for the most part psychopathic, they have absolutely no problem lying to the public. This is also known as the ethics of war where the only morally abhorrant act is losing.

As hard as it is to imagine, the elite practice a form of pagan religion based on the mystery school religions of Sumer and Babylon under which they seek to achieve godhood. Equally important is the use of religion to control the masses and to that end they create exoteric (visible) religions for the masses while embedding in those religions esoteric (hidden) meanings that only those that and enlighted, or illumined as they call it, are able to understand. Consequently, the ancient symbols used thousands of years ago can still be seen in religion, business and the media today.

After experimenting for hundreds of years with different forms of social organization, the elite have concluded that collectivism is the best form of social control. For this reason, and according to the United Nations, totalitarian China is considered the model state for the future.

The elite have long viewed a rising population as a threat to their dominance. They realized that eventually a large number of people will inevitably overthrow and remove them from power. They are particularly concerned with the middle class whose intelligence and capacity to organize makes them the biggest threat. Consequently, the elite plan to destroy the middle class and make all the of public equally poor and thus incapable of rebelling. As written on the Georgia Guide  Stones, they want a global population of just 500 million. This means 6+ billion people must die over the coming century.

The evolution of society is not something the elite can leave to chance since society could evolve in thousands of different and unpredictable ways. If they were ever to allow this they might lose their control and dominance over us. In order to continue their position as the dominant minority, they plan decades and even centuries in advance.

Revelation of the Method

The elite’s do tell us through their books and publications, movies and news releases what they are doing – this is called Revelation of the Method. If you are too stupid to recognize it for what it is that is your problem from their point of view. It is a form of ritual mocking of the victim.