He is Pushing and Deceiving Christians, or Supposed-Christians, Into a Satanic One World Religion!

He has Multi-Millions, due to his Prosperity Pimping, and can live comfortable the rest of his pathetic life. So why does he continue? To help his father Lucifer draw as many to hell with him as possible!

Why Was Joel Osteen At An Openly Proclaimed Satanist Concert Promoting The ‘Gay Mafia’ Agenda? 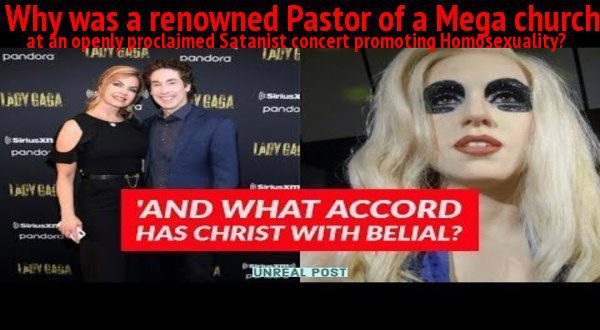 2nd Corinthians 6:14-18 “Be ye not unequally yoked together with unbelievers: for what fellowship hath righteousness with unrighteousness? and what communion hath light with darkness? 15 And what concord hath Christ with Belial? or what part hath he that believeth with an infidel? 16 And what agreement hath the temple of God with idols? for ye are the temple of the living God; as God hath said, I will dwell in them, and walk in them; and I will be their God, and they shall be my people. 17 Wherefore come out from among them, and be ye separate, saith the Lord, and touch not the unclean thing; and I will receive you, 18 And will be a Father unto you, and ye shall be my sons and daughters, saith the Lord Almighty.”

By Don Boys, Ph.D. for All News Pipeline –  It must be said so I will say it. Joel Osteen is a heretic as are many other “soft” Evangelicals who have departed from the faith. (1st Timothy 4:1) I am careful about “attacking” preachers since others are quick to do that, and sometimes the criticism is not valid. However, enough is enough. Joel fits the description of a heretic as being “a professed believer who maintains religious opinions contrary to those accepted by his or her church or rejects doctrines prescribed by that church.”

Osteen is obviously very successful depending on one’s definition of success. He is worth 50 to 60 million dollars, has had seven bestselling books, is loved and adored by millions of fans, and lives in a multimillion dollar mansion with another home worth more than a million. He is selling a one-half acre lot next to his “smaller” home for over a million.

Yes, almost everyone would quickly call him successful; however, I think he is a pathetic person and a disgrace to the ministry. Especially is that true when he is compared to hundreds of thousands of preachers who live what they preach, helping those in need, working in obscurity and doing so at very meager wages.

Joel said, “I don’t argue when people say that my message is simple, but I believe Jesus’ message was simple.” It is a simple message and while simplicity is a virtue, the simple message must also be true. Joel’s message is not true, making him a false prophet.

Even the media characterizes him as a prosperity preacher, no doubt the secret of his success. He said, “It’s God’s will for you to live in prosperity instead of poverty.” But Christ said, “For ye have the poor always with you.” Joel preaches what people want to hear whereas true preachers tell people what they need to hear.

But in one respect, Joel practices what he preaches since they live in a wealthy Houston suburb. The Osteens paid $10.5 million for their mansion that has 6 bedrooms, 6 bathrooms, 5 fireplaces, 3 elevators, a guest house and outdoor pool and pool house. They also own a second $2.9 million mansion in Tanglewood, Houston.

On October 2, 2013, Osteen did a HuffPost Live interview with Josh Zepps where Joel refused to take a biblical position on sodomy. Of course, neither he nor Zepps would ever use that very correct English word.

Zepps quoted from Joel’s book saying, “It doesn’t matter who likes you or doesn’t like you, all that matters is that God likes you. He accepts you, he approves of you.” Zepps then asked if that included homosexuals.

The pastor replied, “Absolutely, I believe that God breathed life into every person and that every person is made in the image of God and you have (sic) accept them as they are, on their journey. I’m not here to preach hate or push people down.” Joel stated. “I’m not here to tell everybody what they’re doing wrong.” If a preacher is not supposed to reveal and explain Bible truths about personal salvation and how to live the Christian life in obedience to God, then why is he preaching? Could it be power, and prestige, and possessions that motivate him? If so, that would make Joel carnal, crass, and commercial.

Of course, the clear implication is those of us who take a biblical position are haters when in reality we are the lovers! If I warn people that smoking, boozing, gaining weight and using illegal drugs will destroy their health and shorten their lives then I am their friend because I told them the truth that, if obeyed, will save their lives. Similarly, since the chosen homosexual lifestyle will shorten a person’s life, fill him with guilt, produce self-loathing leading to thoughts of suicide, saying so makes me a considerate, concerned, compassionate person—not the hater suggested by the media who grovel at the feet of the LGBTQ crowd.

The most recent egregious thing the Osteens have done is their recent appearance at an event celebrating a major LGBTQ “gay” pride event. A news site headlined, “ Joel Osteen Attends Lady Gaga LGBT Pride Event.” According to the New York Daily News Gaga began by asking the crowd, “Are you ready to f____ing party tonight?” In the crowd were Joel and Victoria Osteen, who were indeed ready to party.

The event was hosted to celebrate gay pride at the Apollo Theater and “the pastor of the nation’s largest ‘church’ was in attendance….The entire event was oriented around gay pride.” Christian News noted that the concert “coincides with World Pride Month, which this year is being celebrated in New York City.”

Reports say that “Gaga performed a selection of her most beloved hits dancing around, in a most homoerotic latex fantasy, dropping F-bombs…” She told her audience of movie stars, homosexuals, dragqueens, and others, “So, it’s Pride Week. I wish it could exist 365 days of the year, but I’ll take an [expletive] global week.” Prancing about scandalously dressed, she sang about homosexuality in her song Born This Way—“A different lover is not a sin, believe capital H-I-M,” the tune claims. “No matter gay, straight or bi, lesbian, transgendered life, I’m on the right track baby, I was born to survive. … I’m beautiful in my way, ’cause God makes no mistakes.”

I wonder if the famous preacher and his wife were uncomfortable as a dog in hot ashes with such depravity or if they have grown numb to such debauchery.

The Daily Mail reported, “Prosperity gospel preacher Joel Osteen wore a navy blazer with a gray-blue shirt, while his wife Victoria Osteen had on an elegant black dress with cut-outs over her short sleeves.”

While the Osteens were wearing more clothing than the movie stars, homosexuals, trans genders in attendance, why were they there whatever their clothing? No doubt, it was related to the Osteens’ radio show on Sirius; however, business is no excuse to sit silently while a celebration of perversion is happening.

What were decent people doing in such an event? What were a leading Evangelical pastor and his wife doing there? Why did he not stand on his chair and call them all to repentance as an Old Testament prophet would have done? As the Apostle Paul would have done?

Jude reminds Joel and all preachers to “contend for the faith which was once delivered unto the saints.” Titus 5:20 commands preachers, “Them that sin rebuke before all, that others also may fear.” Titus 1:13 requires us, “Wherefore rebuke them sharply, that they may be sound in the faith.” In II Tim. 4:2 we are told to “Preach the word; be instant in season, out of season; reprove, rebuke, exhort with all longsuffering and doctrine.”

Joel will not reconsider, repent, and return to his religious roots because the price is too great for him to admit error when that admission would dissolve his salary, status, and security.

(Dr. Don Boys is a former member of the Indiana House of Representatives who ran a large Christian school in Indianapolis and wrote columns for USA Today for 8 years. Boys authored 18 books, the most recent Muslim Invasion: The Fuse is Burning! eBook is available here with the printed edition (and other titles) at www.cstnews.com. Follow him on Facebook at Don Boys, Ph.D.; and visit his blog.)