A Satanic Anarchist Tranny as a Sheriff—What could possibly ever go wrong?

Aria DiMezzo is a man who identifies as a woman, and is currently the High Priestess of the Reformed Satanic Church in New Hampshire. Recently, he put himself on the ballot to win the GOP nomination for county sheriff, and guess what? He won!

…. he is mocking the people who were too stupid to realize they were voting for a cop-hating, transsexual satanist for the job of county sheriff…. Source 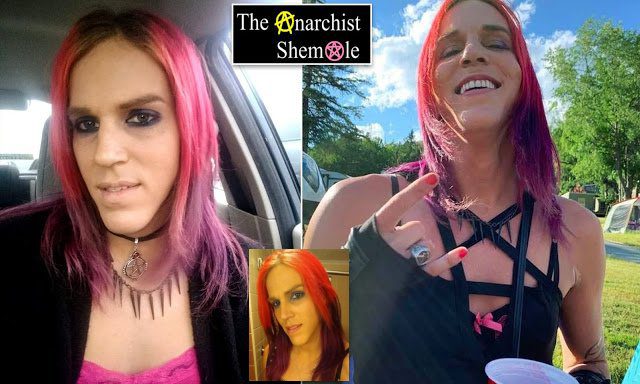 What will be next, Lucien Greaves aka Doug Mesner leader of the Satanic Temple running for President?

Damien Fisher | Inside Sources – The first trans, anarchist, Satanic candidate for county sheriff says she’s not getting a lot of support from the Republican Party.

“I can’t imagine they’re happy about this,” said Aria DiMezzo.

DiMezzo, who is running as a Republican with the campaign slogan “F*** the Police,” said Friday she hasn’t had any help or support for the county or state GOP. DiMezzo won the Republican nomination for Cheshire County Sheriff Tuesday night running unopposed in the primary. She’ll now square off with popular incumbent Democrat Eli Rivera, who is running for his fifth term.

Marylin Huston, Cheshire County GOP chair, congratulated her on her victory. Huston consistently referred to DiMezzo as “he” during the interview, despite the candidate identifying as female.

“He did very well with the primary and that was wonderful,” Huston said. “Aria really came into the Republican party because he was unable to get onto a Libertarian ballot,” Huston said.

DiMezzo signed up to run as a Republican two days before the deadline when she found out long-time Republican candidate Earl Nelson was not running. DiMezzo said she would be willing to be more supportive of the GOP agenda if the party was supportive of her.

“They’re clearly not on my side,” DiMezzo said.  Read more here

Satanic Temple Infested: More than 50% of their Membership are Homo’s Lesbian’s and Tranny’s