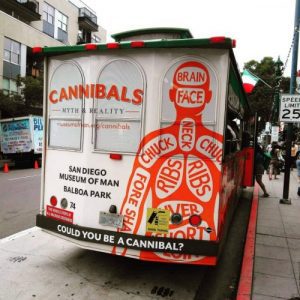 Leo Zagami  – Few topics cause more intense feelings of revulsion than cannibalism, and rightly so. The consumption of human flesh has always been considered abhorrent, vile, and to most, morally wrong. However, a Swedish scientist speaking at a Stockholm summit of libtards and local Illuminati last week offered cannibalism as a possible tactic to combat global climate change, unveiling publically for the first time the fixation of the mondialists with cannibalism. Stockholm School of Economics professor and researcher Magnus Soderlund, a Freemason of the Swedish Rite, said that he believes eating human flesh derived from dead bodies might  save the human race if only a world society were to “awaken the idea.”  The scientist also mentioned the possibility of cannibalism during a TV broadcast on Swedish channel TV4.

Meanwhile in the kingdom of libtards, cannibalism is becoming increasingly fashionable in Southern California. Aside from the reported fixation of Hollywood stars who engage in blood rituals and cannibalism, the Museum of Man, one of the more popular museums of Balboa Park in San Diego, which is said to “inspire human connections by exploring the human experience” in January 2016, began their sickest exhibition to date Cannibals: Myth & Reality. In one-of-a-kind libtard exhibit, you’ll discover that cannibals aren’t who you think they are, and you might even want to join them if you were to listen to the guides. The museum does not describe cannibals as freaks, but as warriors from many cultures, European kings and queens, American and European sailors, American colonists, accident survivors, the sick, and more. When the exhibition opened back in 2016 The San Diego Union-Tribune gave Cannibals high praise: “Get past the ick factor. Stifle the barbecue jokes. Cannibals: Myth & Reality is a poignant and beautiful experience, the type that you hope to get at a museum. It deftly guides you from one emotional place to another, revealing connections across time and cultures, until you reach a point of deeper understanding. Through history, art, films, interactive displays and games, visitors confront what seems, at first, to be an unthinkable choice. By the end, you might realize that it’s far more nuanced and complicated.”

Going back to Magnus Soderlund’s argument for human cannibalism that took center stage at the Gastro Summit during a panel called “Can You Imagine Eating Human Flesh?”

“Conservative” taboos against cannibalism, he said, can change over time if people simply tried eating human flesh. Some of the talking points at the seminar have included whether humans were too selfish to “live sustainably” and if cannibalism is the solution to food sustainability in the future. When asked during an interview after his talk if he would try human flesh, Soderlund said he was open to the idea.

Cannibalism causes infamous Kuru, a very rare disease caused by an infectious protein (prion) found in contaminated human brain tissue. Kuru was first found among people from New Guinea who practiced a form of cannibalism in which they ate the brains of dead people as part of a funeral ritual. This practice stopped in 1960, but cases of kuru were reported for many years afterward because the disease has a long incubation period. Although the knee-jerk reaction to eating human flesh is strong, the actual morality and ethics behind feelings like these will change in the years to come if it were up to the sick propaganda of the leftist agenda to “save the world.”

Of course in desperate times, people have resorted to cannibalism to survive; for instance, there are reports of cannibalism during the North Korean famine in 2013, the siege of Leningrad in the early 1940s, and China’s “Great Leap Forward” in the late 1950s and 1960s, but what Swedish behavioral scientist Magnus Soderlund has suggested is that eating people after they die could actually be a means of combatting climate change in the ultimate screwed up agenda to save humanity from extinction. For these sickos of the NWO, many of us eat our fingernails, and some women eat their placenta after giving birth, so why is it such a big deal? They want to convince us to become cannibals to join their Satanic legion.