No, she joined because she is an Radical God Hating Feminist and Atheist! The Draw of Satan has always been there.

Also, a logo for the Satanic Temple is based on Abortion!

These clowns are being exposed by God. He is marking them so we know exactly who they are!

ALL—let me say that word again—ALL Leftists—ALL Democrats are Satanists!

When Justice Ginsburg died, I knew immediately that action was needed on a scale we have not seen before. Our democracy has become so fragile that the loss of one of the last guardians of common sense and decency in government less than two months before a pivotal election has put our civil and reproductive rights in danger like never before. And, so, I have turned to Satanism.

Let the Joyous News be Spread, ONE of the Wicked Witches at last is Dead!

The BLM Scum says that it is a Spiritual Movement.

It IS Good vs Evil! What do you expect when the Communist Democrats incorporate Baphomet into their logo?

Democrats Recruit Baphomet: Incorporate Him into their New Logo

Satanists and Witches Back Biden and the Demonic Democrat Party

‘I am proud to now count myself among their ranks’ 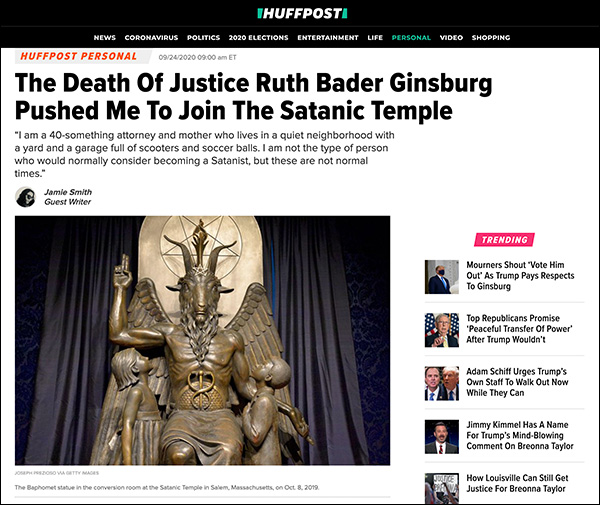 In an op-ed published at Huffington Post, 40-something soccer mom and attorney Jamie Smith explained how her left-leaning atheist beliefs spilled over into full-blown Satanism after she realized RBG’s death could mean the end of abortions in America.

When Justice Ginsburg died, I knew immediately that action was needed on a scale we have not seen before. Our democracy has become so fragile that the loss of one of the last guardians of common sense and decency in government less than two months before a pivotal election has put our civil and reproductive rights in danger like never before. And, so, I have turned to Satanism.

Smith naively claims the Satanic Temple differs from the Church of Satan in that the Temple doesn’t worship Satan per se, but merely uses him as a symbol.

In the same way that some Unitarians and some Jews do not believe in God, Satanic Temple members do not worship Satan and most are atheists. They are not affiliated in any way with the Church of Satan. Instead, the Satanic Temple uses the devil as a symbol of rebellion.

Note: 1st Samuel 15:23 “For rebellion is as the sin of witchcraft, and stubbornness is as iniquity and idolatry. Because thou hast rejected the word of the LORD, he hath also rejected thee from being king.”

Rebellion is what got her god kicked out of heaven and SHE will be forever with him in the Lake of Fire one day.

Now back to the article.

Smith said after reading through the Temple’s system of beliefs, dubbed the “Seven Tenets,” she realized her own ideology closely matched theirs.

Reading through the Seven Tenets, I was struck by how closely they aligned with the unwritten code I had used to try to guide my own life for several years. I realized, happily, that these were my people and that I had been a Satanist for several years without even knowing it.

Smith claims she was attracted to the Temple because their legislative battles, especially in the area of abortion, mirror Justice Ginsburg’s own perspectives on the issue.

When Justice Ginsburg’s death suddenly made combating the threats to reproductive rights and a government free from religious interference more urgent, I knew it was time to join them and support their conceptual and legal battles.

Even before Ginsburg’s death, the Supreme Court was unwilling to provide adequate protection for a woman’s right to choose and to control her body.

“We need creative, resolute thinkers who are willing to stand up for what they believe in and take concrete action to do so, and the Satanic Temple is full of those kind of people,” she says, adding, “I am proud to now count myself among their ranks.”

Ultimately, Smith says she joined the Temple for her daughters to have the right to kill their babies in the womb if they so choose.

“While I never had an abortion, I want the same opportunities to choose for my own daughters.

While Smith may believe her line of thinking is unique, other prominent Democrats have also been linked to Satanic worship.

Neurosurgeon Ben Carson pointed out during the 2016 RNC that Hillary Clinton mentor Saul Alinsky, whose work is central to the dogma of leftist Democrats, praised Lucifer in the opening pages of his book, Rules for Radicals.

Here’s an excerpt from Carson’s speech:

One of the things that I have learned about Hillary Clinton is that one of her heros, her mentors, was Saul Alinsky.

And her senior thesis was about Saul Alinsky. This was someone that she greatly admired and that affected all of her philosophies subsequently.

Now interestingly enough let me tell you about Saul Alinsky. He wrote a book called “Rules for Radicals.” On the dedication page it acknowledges Lucifer, “the original radical who gained his own kingdom.”

So are willing to elect someone as president who has as their role model somebody who acknowledges Lucifer? Think about that.

The secular progressive agenda is antithetical to the principles of the founding of this nation.

The Battle between Good and Evil: Part 1

The Sheep and Goats are READY: Guess what is Waiting to be Implemented?