Well what the hell is she then? A reincarnated Mother Teresa? She surely is NOT a Christian! Anyone with at least 2 active brain cells can see from her videos and images that she is akin to one! 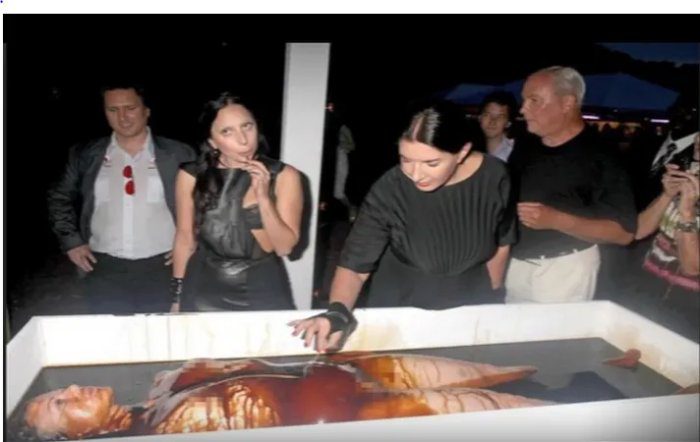 If Jesus told the “ Religious” folk who followed him they were of the devil, then who do you think Jezebel Marina Abramovic’s Daddy is?

John 8:41-45 “Ye do the deeds of your father. Then said they to him, We be not born of fornication; we have one Father, even God. 42 Jesus said unto them, If God were your Father, ye would love me: for I proceeded forth and came from God; neither came I of myself, but he sent me. 43 Why do ye not understand my speech? even because ye cannot hear my word. 44 Ye are of your father the devil, and the lusts of your father ye will do. He was a murderer from the beginning, and abode not in the truth, because there is no truth in him. When he speaketh a lie, he speaketh of his own: for he is a liar, and the father of it. 45 And because I tell you the truth, ye believe me not.”

He also said when the religious accused him of casting out demons by the power of the devil this: Matthew 12:30 “He that is not with me is against me; and he that gathereth not with me scattereth abroad.”

Of course the world has gone mad, Topsy-turvy and does NOT know what evil is! Even supposed Christians can’t discern evil because they too are of the devil! I have started getting emails again from people who claim they are Christians, and play Dungeons and Dragons! They try and justify it because once again, they can’t discern it! As the Lord said in the Scripture above, “Why do ye not understand my speech? even because ye cannot hear my word.”

The Apostle Paul would write to the wicked ones in Corinth…

This Jezebel is just like all of the other Satanic trash. They twist words and try to turn Evil into Good, and Good into Evil. Well that boat won’t float scooter! GOD—gave these words to the Prophet Isaiah.

Isaiah 5:20-24 “Woe unto them that call evil good, and good evil; that put darkness for light, and light for darkness; that put bitter for sweet, and sweet for bitter! 21 Woe unto them that are wise in their own eyes, and prudent in their own sight! 22 Woe unto them that are mighty to drink wine, and men of strength to mingle strong drink: 23 Which justify the wicked for reward, and take away the righteousness of the righteous from him! 24 Therefore as the fire devoureth the stubble, and the flame consumeth the chaff, so their root shall be as rottenness, and their blossom shall go up as dust: because they have cast away the law of the LORD of hosts, and despised the word of the Holy One of Israel.”

In an interview with the New York Times on Tuesday, the “Spirit Cooker” insisted “I am an artist, not a Satanist.”

“I need to open my heart,” Abramovic said. “I really want to ask these people, ‘Can you stop with this? Can you stop harassing me? Can’t you see that this is just the art I’ve been doing for 50 years of my life?’”

According to Abramovic, posing with flayed goat heads in blood-red vinyl outfits does not mean she is a Satanist — it’s art. Brewing blood, feces, semen and breast milk cocktails for political elites and hosting dinner parties where celebrity guests “pretend” to consume human flesh has nothing at all to do with Satanism — it’s just art, OK?

That totally explains why Allison Mack, the Hollywood actress and convicted child trafficker and NXIVM occultist, posted a picture of Abramovic on her social media just before fleeing to Mexico in 2018 prior to her arrest — she’s just a prolific “artist.”

On Good Friday, the holiest day in the Christian calendar, Bill Gates’ Microsoft released a commercial promoting its association with the elite’s favorite artist: Marina Abramovic.

After a huge backlash from internet users calling her out as a Satanist, the video was set to “private” and all traces of the doomed campaign were scrubbed from Microsoft’s official website.

Take a look at some of Marina Abramovic’s “art” and decide for yourself.

A friendly word of advice for Abramovic: if you aren’t prepared to receive criticism for appearances in widely-viewed advertisements for major international corporations like Microsoft, maybe you shouldn’t do them.