Oprah Winfrey is the epitome of Matthew 7:15-16 “Beware of false prophets, which come to you in sheep’s clothing, but inwardly they are ravening wolves. 16 Ye shall know them by their fruits. Do men gather grapes of thorns, or figs of thistles?”

Oprah is not a prophet of the True God in Heaven. She is a New Age prophet, a practicing Witch of the EVIL ONE Satan! After this info about this witch, you will see links to other articles and videos about her false beliefs and shenanigans. This is one Evil Jezebel of a woman!! 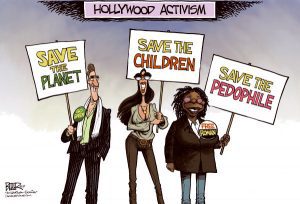 There are far too many pedophiles and sex traffickers in Oprah Winfrey’s inner circle to be a coincidence, according to a Montecito-based psychic who has quit providing her services to Oprah citing “ethical concerns.”

The psychic’s suspicions were raised after Oprah’s close friend Jerry Harris was sentenced to 12 years in prison on child sex crimes earlier this month by US District Judge Manish Shah.

Harris was the star of Oprah Winfrey’s Netflix show “Cheer” and was found guilty of child sex abuse charges after he was caught using his position to lure underage children into being raped.

Jerry Harris is just the tip of the iceberg when it comes to Oprah and pedophiles.

Even Oprah’s spiritual advisor has been sentenced to prison on sickening sex charges. João de Deus or John of God, received a 19 year prison sentence in 2019 following a torrent of sex abuse allegations followed him around for years.

Oprah featured João de Deus on her talk show in 2012 after traveling all the way to Brazil to interview him, and called him “inspiring.”

For some reason Oprah didn’t tell her audience that John of God was literally farming babies through the sex slavery of very young girls and selling infants around the world to the highest bidder.

John of God is connected to many elite celebrities such as Bill Clinton, Naomi Campbell, and Marina Abramovic, who filmed a documentary at his compound in Brazil in 2016.

A few days later, the woman who exposed the story, Sabrina Bittencourt, mysteriously took her own life.

Her son was quoted on social media as saying, “they killed my mother.”

Which begs the question, is Oprah Gail Winfrey the world’s richest and most famous pimp?

Truth tellers who have been granted a glimpse behind the curtain have been saying for years that Oprah has a “sick agenda”.

Rose McGowan came the closest to hinting at the full truth when she said Oprah is “about supporting a sick power structure” and tossed in the hashtag #lizard to hint at even darker secrets.

British singer Seal, who has known Oprah for decades, also blasted America for falling for the talk show host’s hypocritical persona. Describing Oprah as having been “part of the problem for decades“, Seal wrote:

“Oh I forgot, that’s right…..you’d heard the rumours but you had no idea he was actually serially assaulting young stary-eyed actresses who in turn had no idea what they were getting into. My bad. #SanctimoniousHollywood”

Seal posted two pictures – one of Oprah sucking Harvey Weinstein’s ear, and the other showing Oprah offering Weinstein some fresh meat in the form of a very young Rita Ora.

And don’t forget about British actress Kadian Noble, who minced exactly zero words when she said Oprah “pimped me like a whore” to Hollywood serial rapist Harvey Weinstein.

Noble claims that when she first met Weinstein at an event in London, she was overtly impressed because he was partying with model Naomi Campbell and had Oprah “swinging off his arm”.”

There is even talk of a high level cover up with a Hollywood entertainment lawyer claiming that the bombshell Michael Jackson documentary ‘Leaving Neverland’ was funded by Oprah and Harvey Weinstein.

According to a lawyer who goes by the name ‘Enty’, the resurfacing of previously debunked claims that Michael Jackson molested children is all part of a ploy by a group of Hollywood elites to distract attention away from the real perpetrators of child abuse.

She is a Stone Cold RACIST!

White People have to DIE!