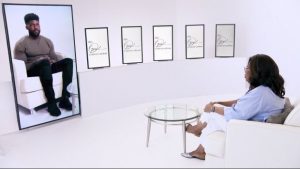 This is nothing compared to what you will learn about this Wicked Jezebel in another article. She is a full blown Pedophile who is into child sacrifice!

“Whites have a leg up. You still have your whiteness. That’s what the term ‘white privilege’ is. It means that whiteness still gives you an advantage, no matter what”, Oprah said.

Geoffrey Grider | NTEB – It is astonishing to me to watch so many black entertainers and athletes become rich and famous, who get to live a life of luxury that 95% of the people in this country will never know, and then trash the very system and the very people that gave them that success. Billionaire Oprah Winfrey is one of those people, and she wants the world to know that if you’re white then you have to be a racist because, well, that’s just the way it is. Excuuuuse me?

There is an effort underway by the Liberal elites, a demonically-inspired attack to cast Caucasian people as racists, not for anything they’ve said or done, but merely because they are ‘white’, and ‘white’ is bad. Why is Oprah Winfrey doing this? It has nothing to do with the color of her skin, it has nothing to do with ‘ending racism’, for her very position is racist in the extreme. So what then?

It is because Oprah Winfrey is part of the privileged elites who are working to tear down society and bring in the New World Order. The name of her network, called OWN, is NWO backwards. NWO stands for New World Order. Any questions?

Oprah Hosts White Guilt Session: ‘Whiteness Gives You an Advantage No Matter What’

FROM BREITBART NEWS: Billionaire media mogul Oprah Winfrey declared in an episode of her eponymous series, The Oprah Conversation that “whiteness” and “white privilege” afford unspecified benefits to white people in the “caste system” of America.

In an episode entitled “Uncomfortable Conversations with a Black Man: Part 1” — featuring former NFL linebacker Emmanuel Acho and drawing its name from Acho’s YouTube series of the same name — Oprah Winfrey invited several white people to discuss “racism,” “white privilege,” and “whiteness.” Oprah praised her white guests for accusing themselves of being “racist.”

There are white people who are not as powerful as the system of white people — the caste system that’s been put in place — but they still, no matter where they are on the rung, or the ladder of success, they still have their whiteness.

Whites have a leg up. You still have your whiteness. That’s what the term “white privilege” is. It means that whiteness still gives you an advantage, no matter.

“It is the fundamental issue,” declared Oprah of racial assumptions.

Oprah just lost her magazine, her cable station is doing lousy, all the candidates she backs end up losing, yet she's still pushing "identity politics" 🙄https://t.co/Rr8syq5pkC

The Wrinkle in Time star invited Seth, a self-described Jewish man from Manhattan, New York, to describe his “awakening” to his own “racist” self.

“You’ve become ‘woke’ during this period, and realized in that awakening that you are racist, right?” asked Oprah. “I just want to know how that happened.”

Seth replied, “I was born in the 70s. I was born and raised in Manhattan. I’ve always considered myself to be liberal. Now I’m not only a friend of people of color but also an advocate for [them], but this this movement over the last month has been powerful.”

Seth indicted himself as a “racist” who is aspiring to become an “anti-racist.”

Here’s what I told my friends  with their white children. I said, “Y’all live in a white cul-de-sac, in a white neighborhood, in a white city, in a white state. If you were not careful. your children will live their whole life white, and at [the ages of] 26, 27, they’ll end up being a part of the problem, because you just let them and allowed them to live a completely white, sheltered, and culture-less life.