Zimbabwe December 2016  – A pastor is fighting for his life after he was poisoned by his son. Mr David Dambuka of Gutu is now bedridden and his condition is deteriorating. The son poisoned him after being initiated into satanism by a teacher at his school.

This Satanist Kills Babies Born Alive and gets away with it!

The House Select Investigative Panel on Infant Lives has announced that it has made a total of 15 criminal referrals based on its investigation into the underground trade in aborted baby organs and tissue. Six of the referral letters were just released late yesterday, while nine others had been previously made public.

Under the guise of public safety, Democratic and Republican law makers have pushed for a law that would allow for the implantation of tracking microchips in minors with autism and senior citizens with dementia.
Following the drowning deaths of 9-year-old Kevin Curtis Wills in 2008 and 14-year-old Avonte Oquendo in 2014, both diagnosed with autism, legislators presented Bill H.R. 4919 that would apply to both children and the elderly.

The Express THOUSANDS of people, including pagans and druids dressed in traditional clothing, gathered at Stonehenge to celebrate the shortest day of the year. 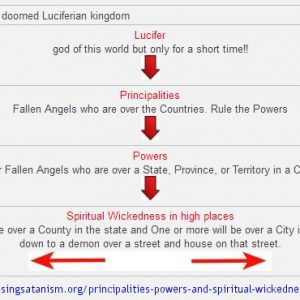 One of the issue’s two front covers features a boy dressed up in girl’s clothing, with a quote from him stating, “The best thing about being a girl is, now I don’t have to pretend to be a boy.”

InfoWars December 19, 2016 – The cover of National Geographic’s upcoming January issue has sparked outrage online for featuring children questioning their genders and spotlighting what they call a “gender revolution.”

Pan follower says that he has been wearing the horns since 2009 after a friend’s goat died and no one laid claim to its horns.

Christian News December 19, 2016 – A Maine man who identifies himself as a “priest of Pan” has been granted the right to wear horns on his head for his identification photo because of his assertion that the horns are a part of his religious attire.

(BBC NEWS) Pakistan’s national airline has been mocked after a goat was sacrificed to ward off bad luck following one of the country’s worst air disasters.

Daily Mail December 19, 2016 – At least nine people have been killed and more than 50 injured after a lorry ploughed through a crowd of shoppers at 40mph in a busy Christmas market in Berlin.

RT December 16, 2016 – More details are emerging on the alleged sexual abuse of dozens of children at a care home in London, as survivors publish their own 129-page report after losing faith in the official inquiry.

According to Shirley Oaks Survivors Association’s (SOSA) own investigation, two men dressed as Father Christmas abused children at the Croydon facility, just one in a horrifying list of crimes that date as far back as the 1960s. The report was compiled by former residents who lost hope in the controversial Independent Inquiry into Child Sexual Abuse following the resignations of its two first chairs and prestigious panel members.