Satan, the god of this world, god of Witchcraft and Satanism, demands a Human Sacrifice. He does not care how it is done, be it via Abortion, or direct Murder!

Witchcraft and black magic contribute to increase in child abuse 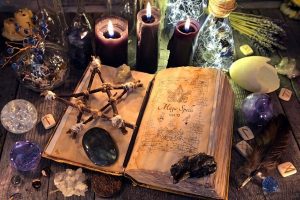 Robert Booth – Social affairs correspondent | The Guardian – Witchcraft and black magic are increasingly factors in the abuse of children, councils have warned, with official data showing child protection cases based on faith or belief are up by a third in the last year in England to almost 2,000.

Lancashire, Bradford and Leeds recorded the highest number of cases in 2018/19 but social workers across the country logged increasing numbers of incidents on the previous year including 71 in Nottingham, 35 in Bristol and 34 in Southwark.

It means councils are now dealing with the equivalent of 38 such cases a week, said the Local Government Association, which is calling for more resources to tackle the problem. Cases based on faith or belief include abuse under the guise of witchcraft, treating spirit possession and through black magic. The data, published by the Department for Education, was received by campaigners as evidence that social workers are getting better at identifying often hidden and culturally complex factors in abuse.

But there was also alarm that the numbers are rising so long after the high profile deaths of Victoria Climbié, eight, who was killed as a result of ritual abuse by her guardian in 2000, Khyra Ishaq, seven, who was starved to death in 2008 in Birmingham by her mother and her partner who had a strong belief in spirits and Kristy Bamu, 15, in 2010 killed by his sister and her partner in an exorcism in their east London flat.

The data also showed the number of children identified by councils through a social work assessment as either having or being at risk of female genital mutilation has reached a record high – with 1,000 such cases in 2018/19, up 6% on the previous year.

“Rising cases of FGM and child abuse linked to faith or belief are extremely worrying and are destroying the lives of children and young people in communities across the country,” said Cllr Anita Lower, the Local Government Association’s lead on FGM. “Social workers have become better at identifying the signs of FGM and belief-related abuse, but the true incidence rate is likely to be higher as these crimes are under-reported.”

Mor Dioum, director of the Victoria Climbié Foundation, a charity campaigning for improvements in child protection policies, said: “It is encouraging to see practitioners identifying harmful practices that can lead to serious injuries or child deaths. However, we need further examination of census data to understand the prevalence of these abuses, and to effectively engage with communities if we are to prevent child abuse linked to faith or belief, including the eventual eradication of FGM.”

The Metropolitan police stressed that only a minority of people who believe in witchcraft or spirit possession go on to abuse children. In a briefing it said belief in evil spirits that can “possess” children is often accompanied by a belief that a possessed child can infect others through sharing food, or simply being in their presence. Rebelliousness, nightmares or falling ill can be taken as symptoms of “possession” while sometimes children are scapegoated for financial difficulties, divorce, infidelity, illness or death.